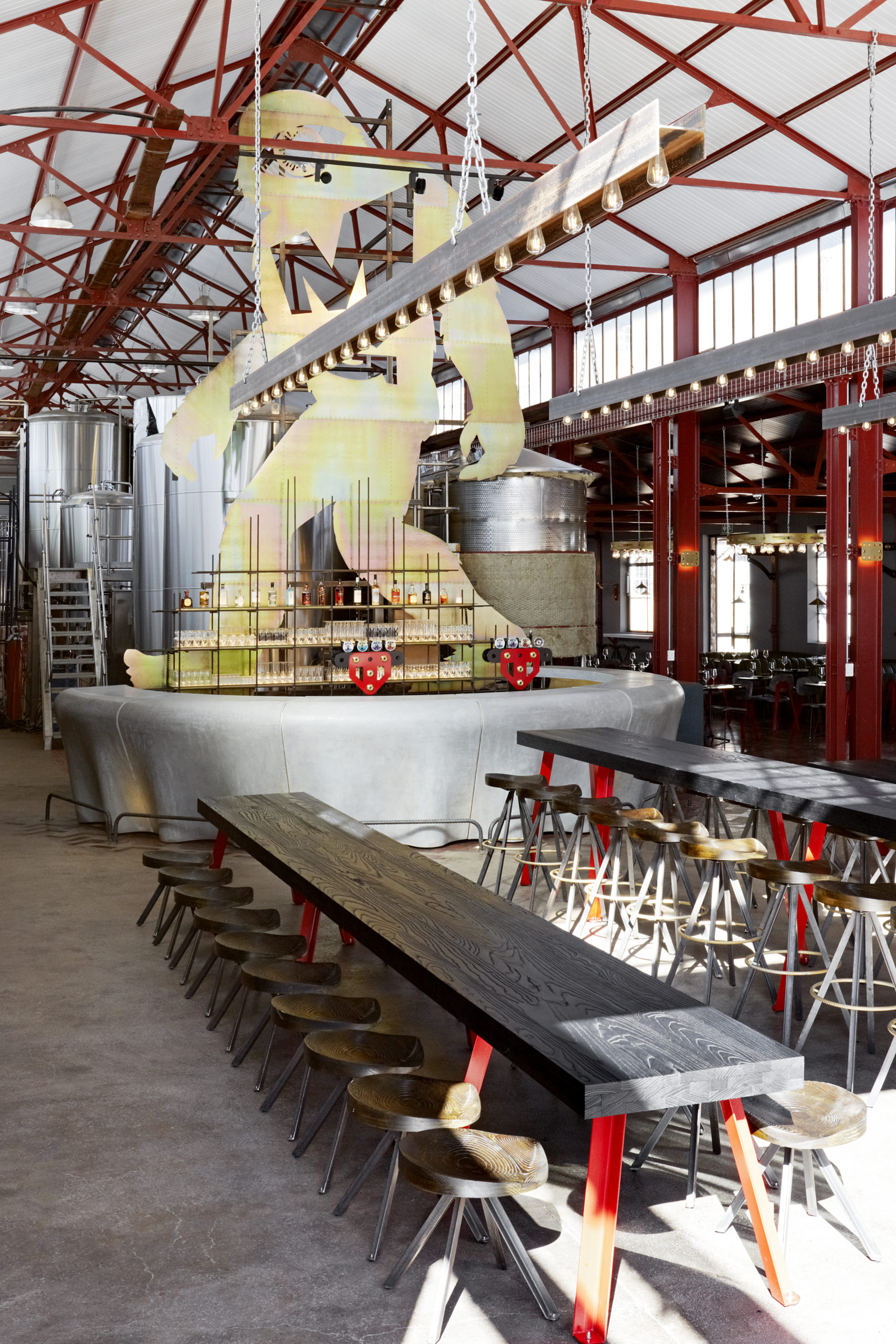 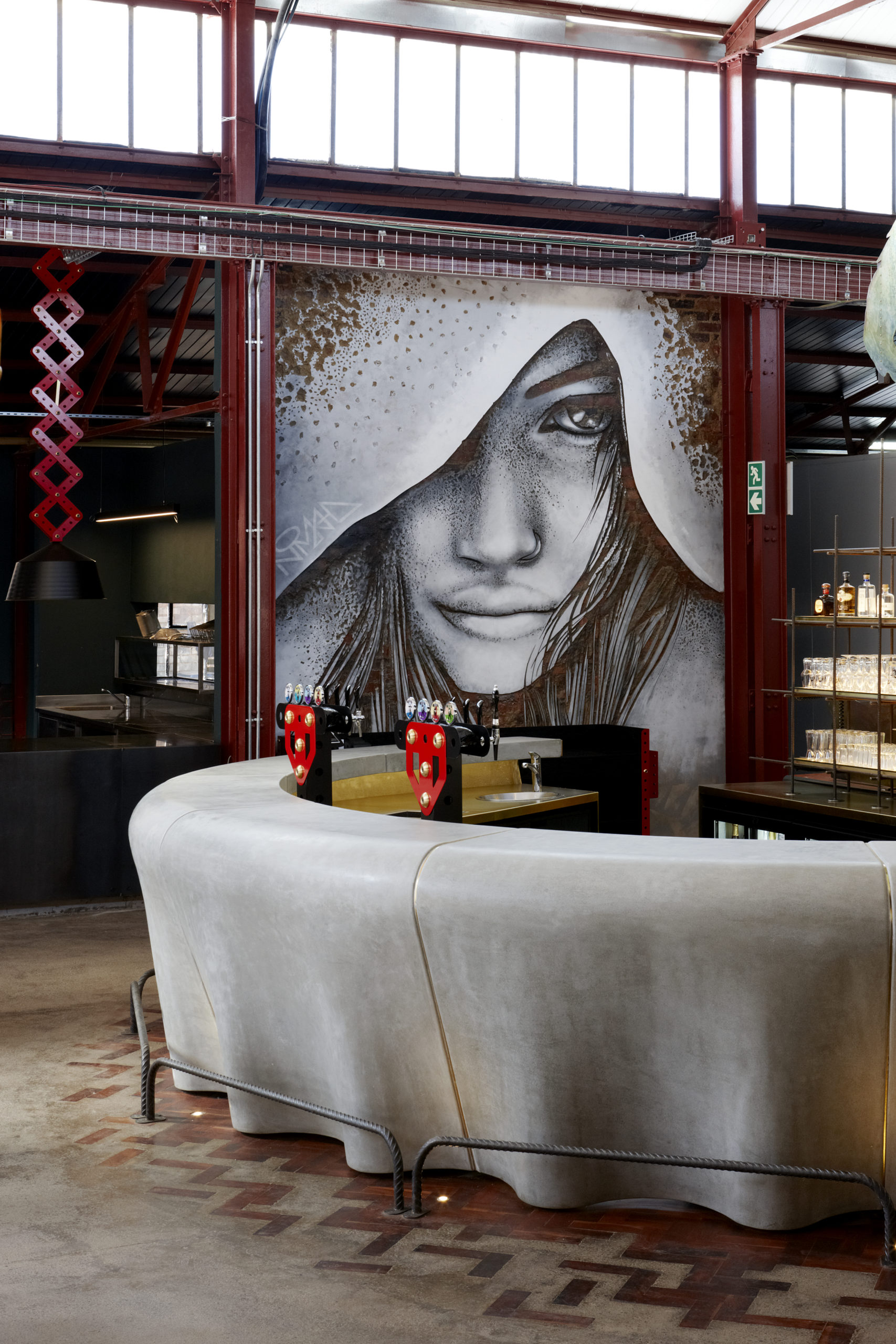 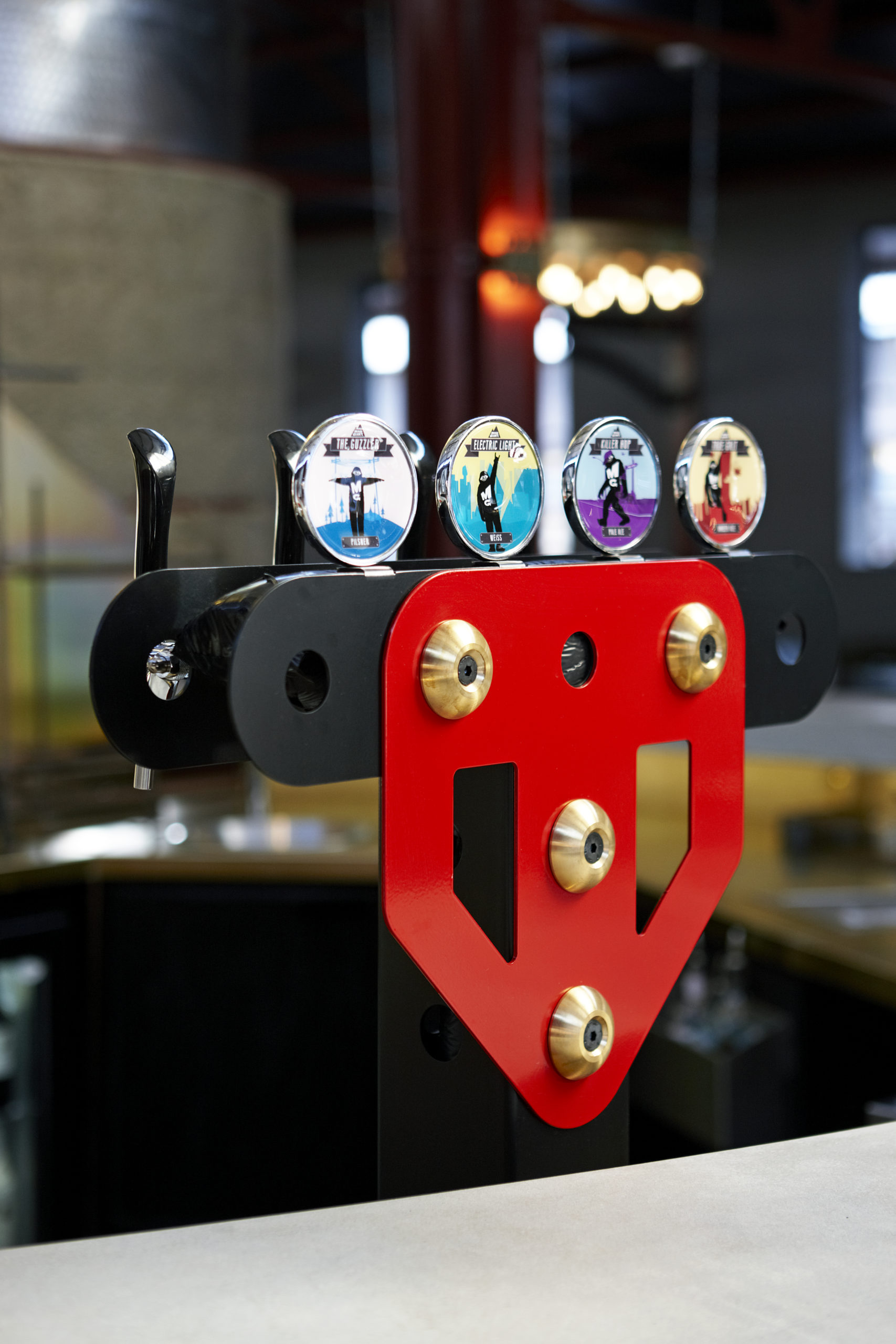 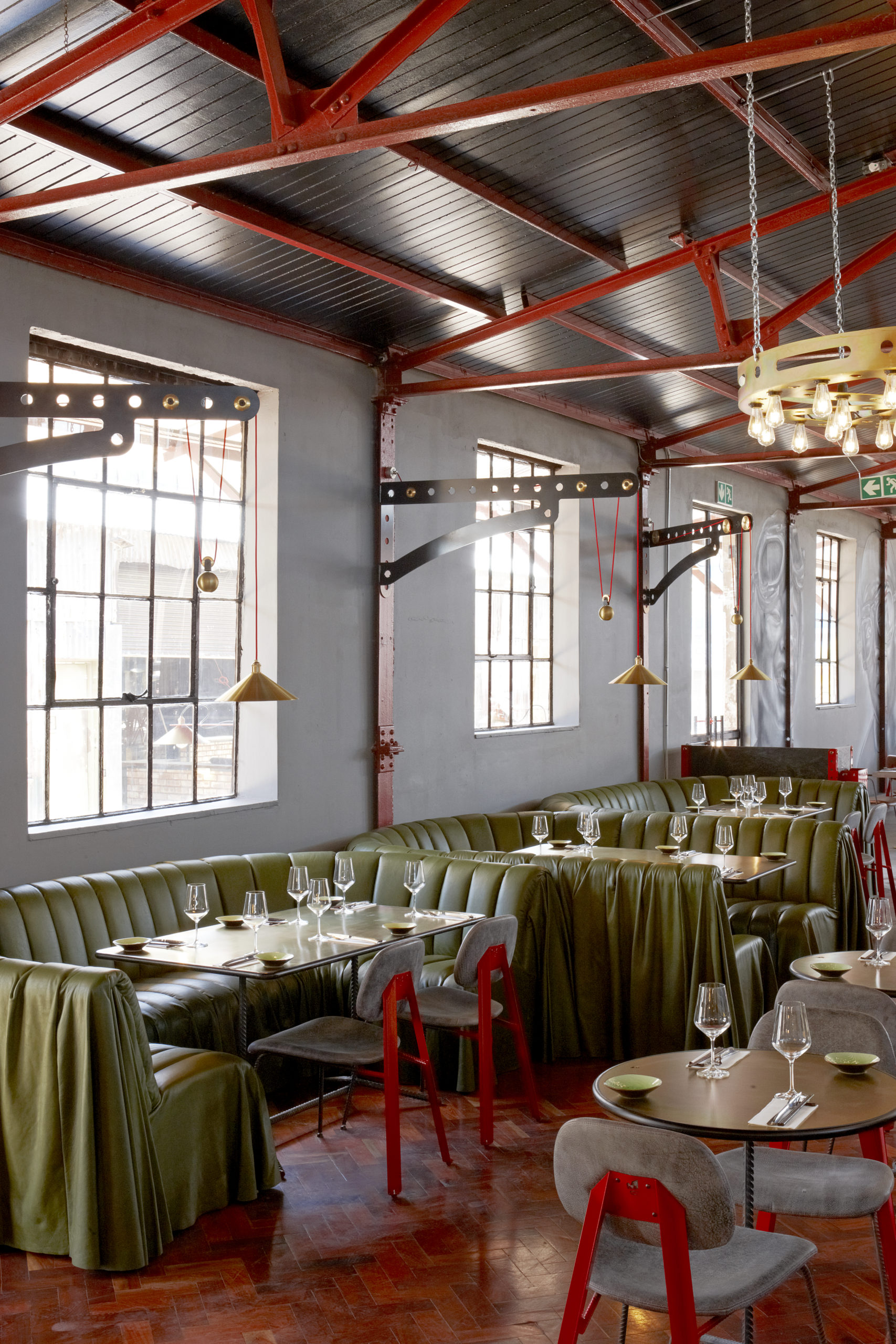 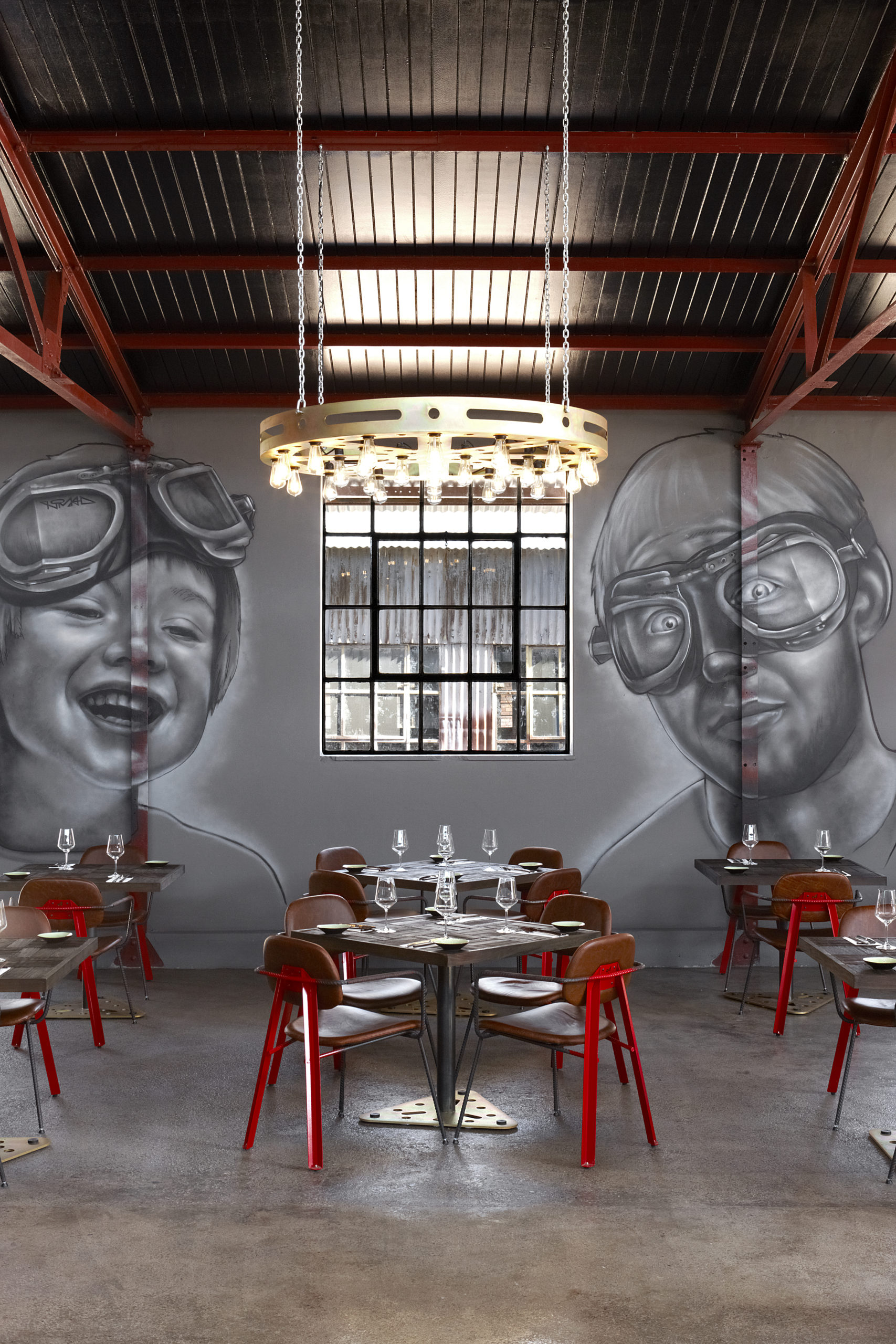 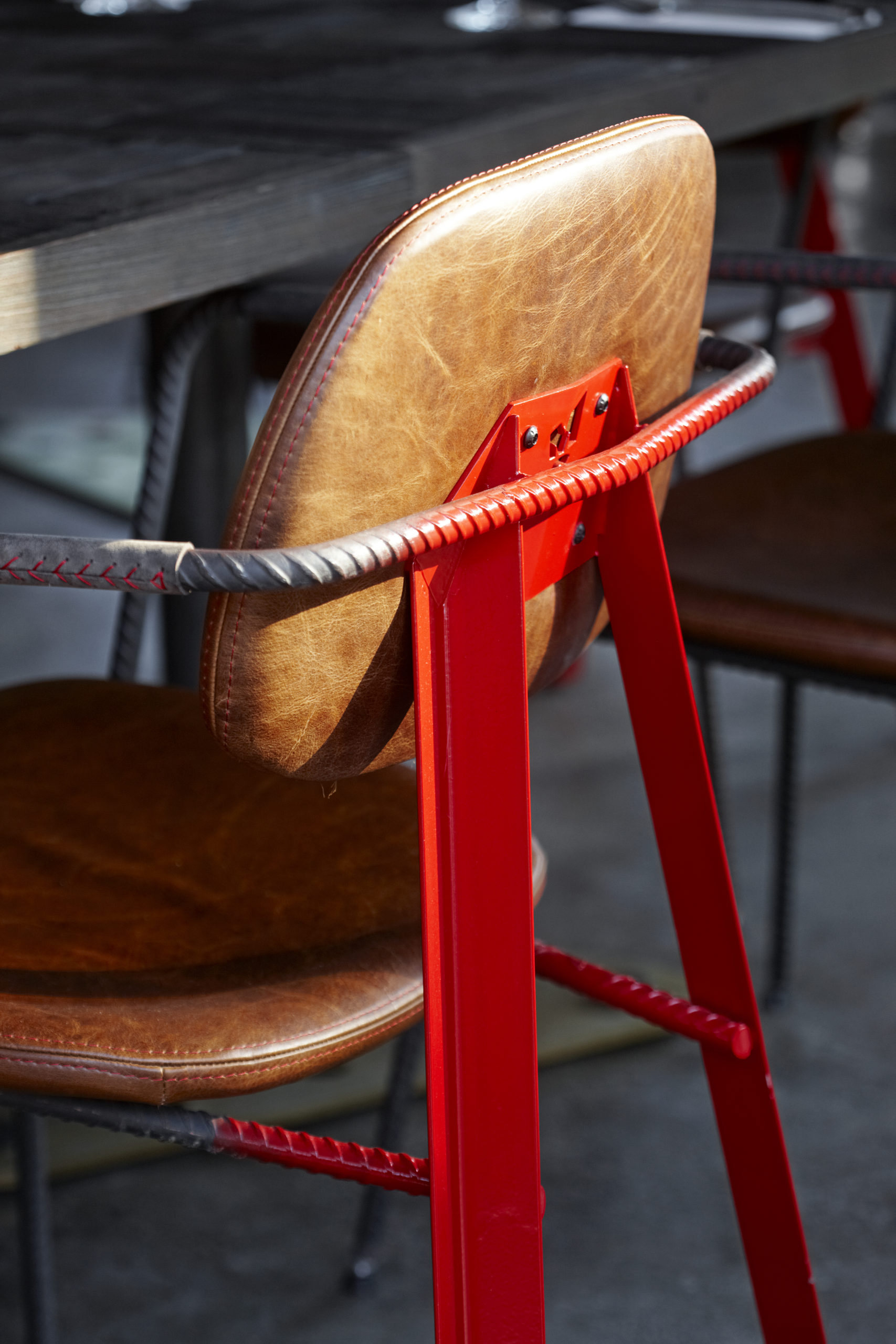 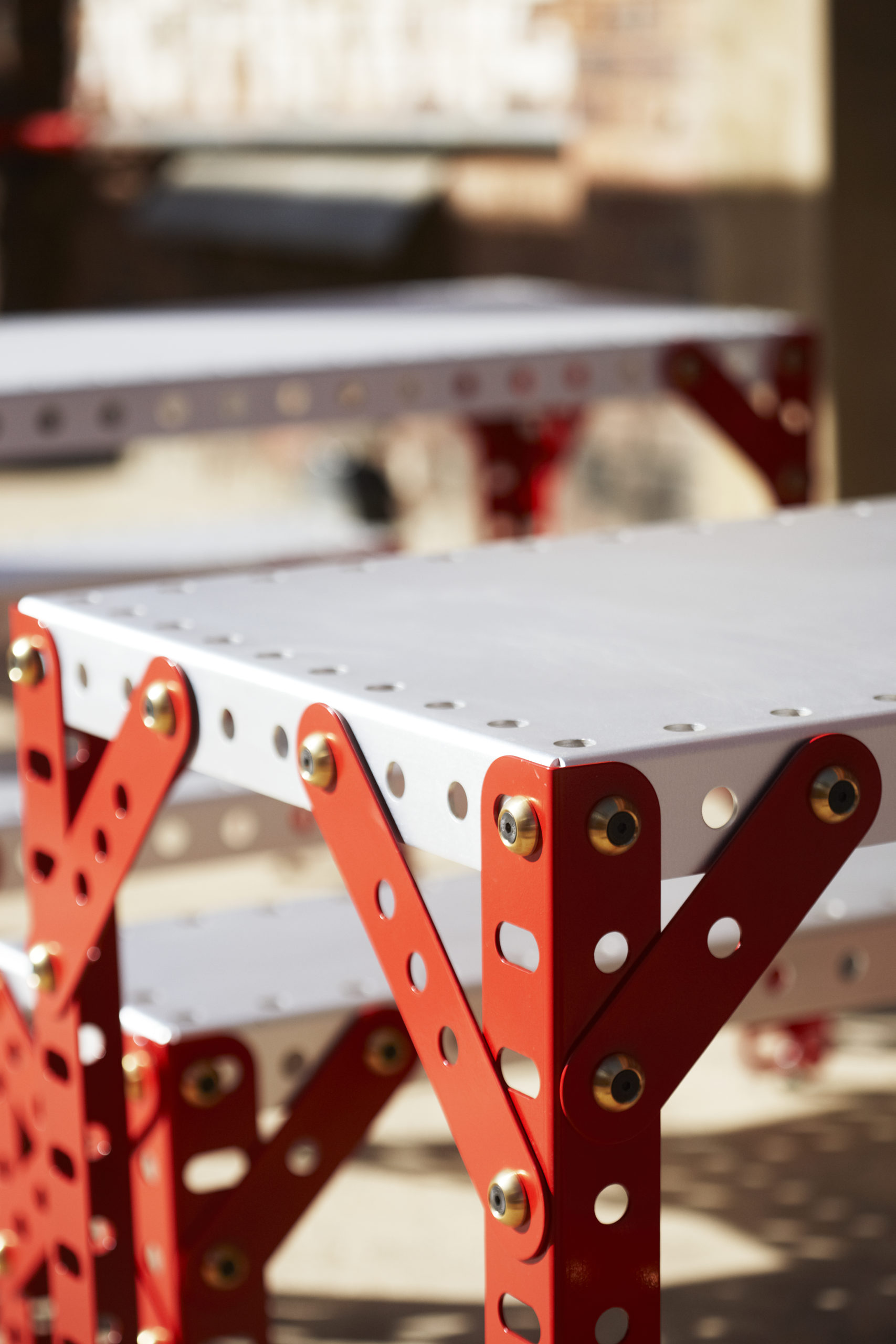 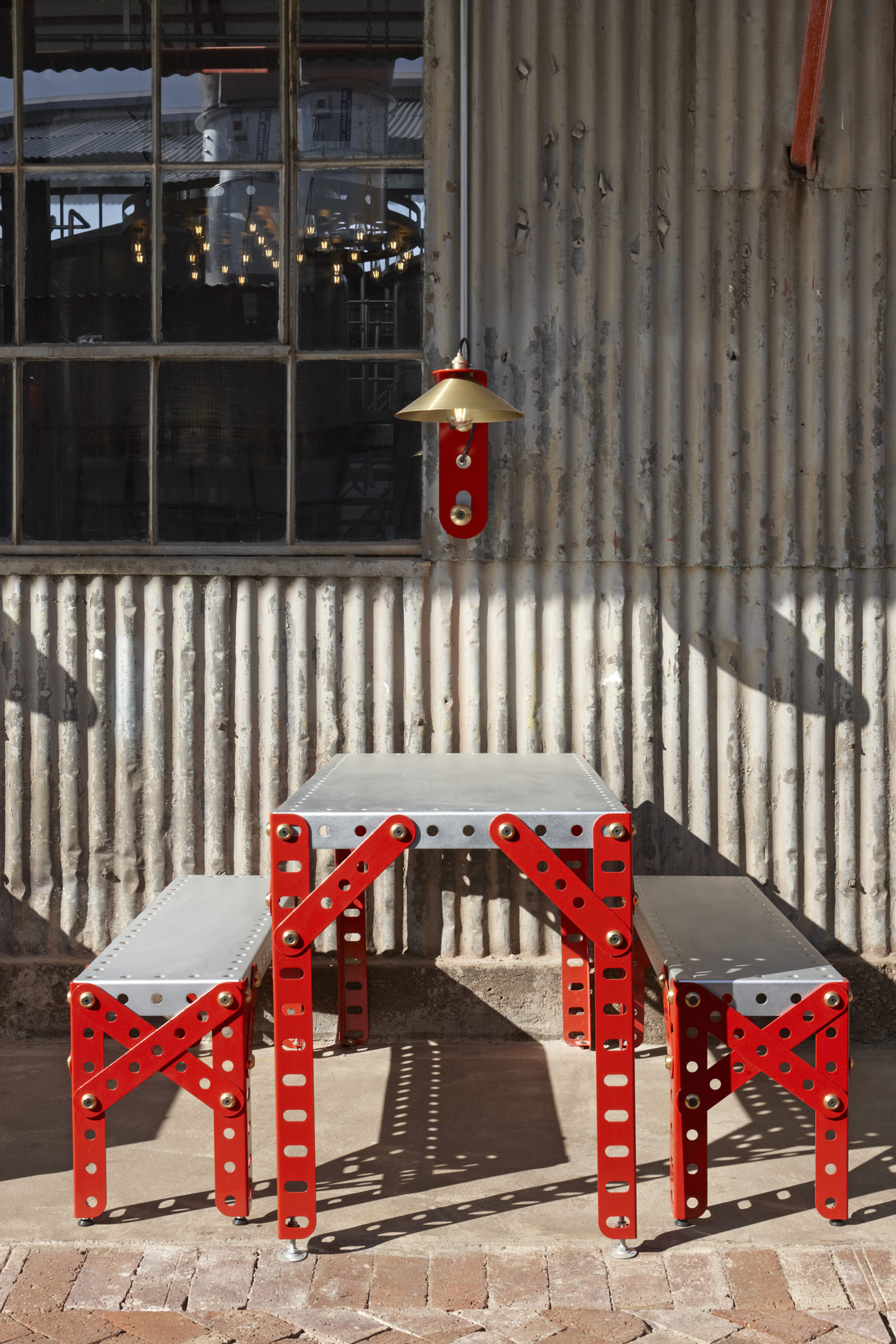 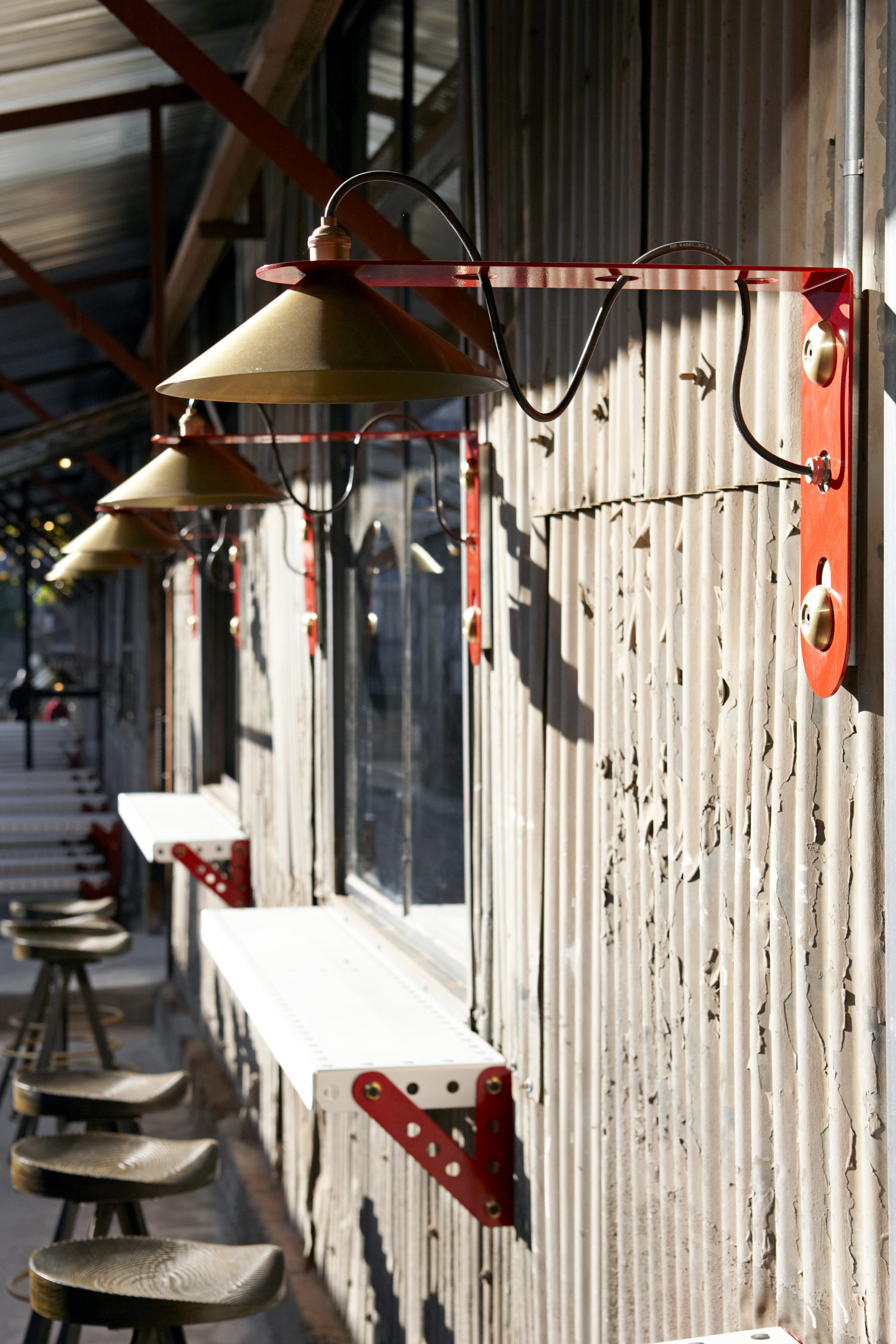 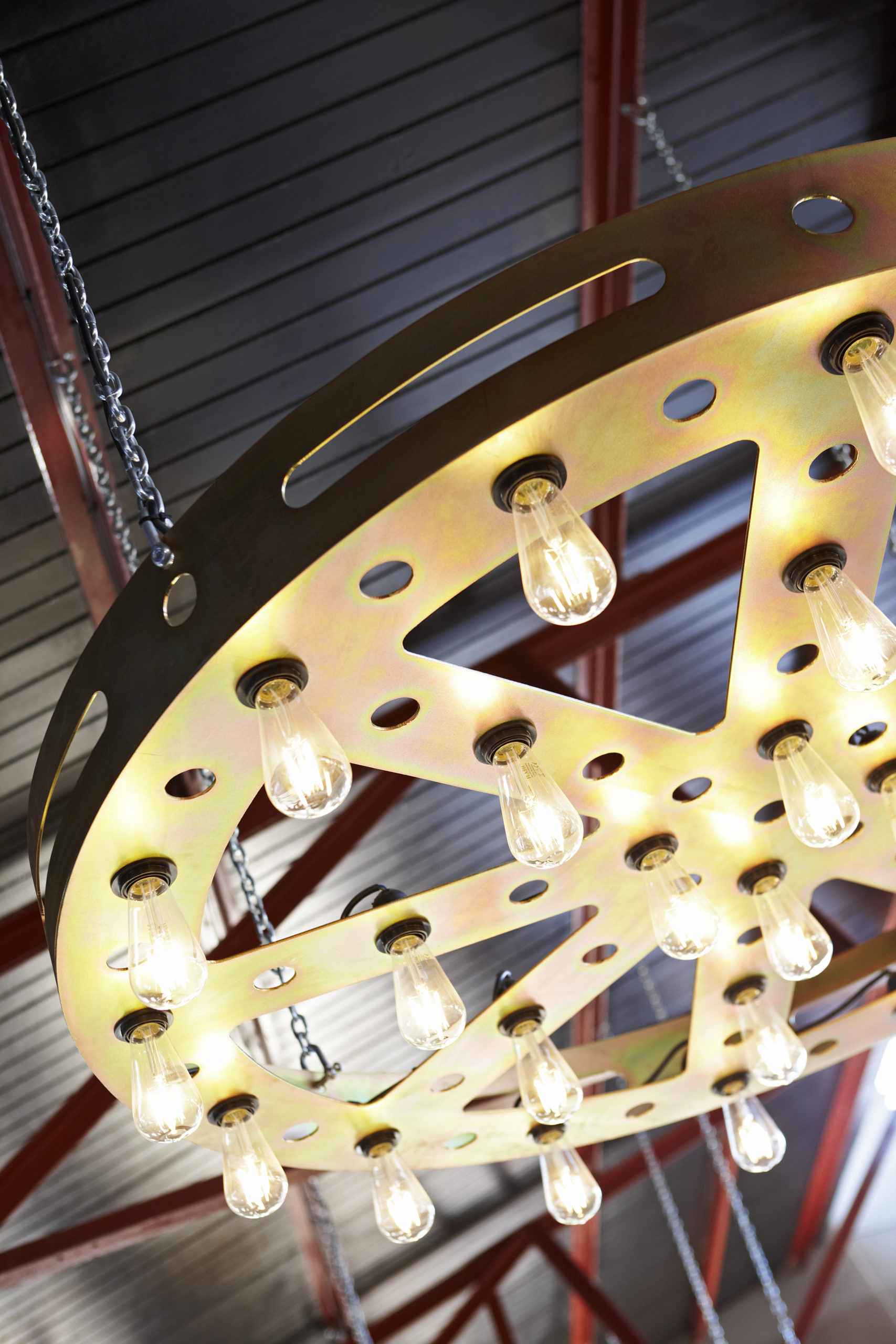 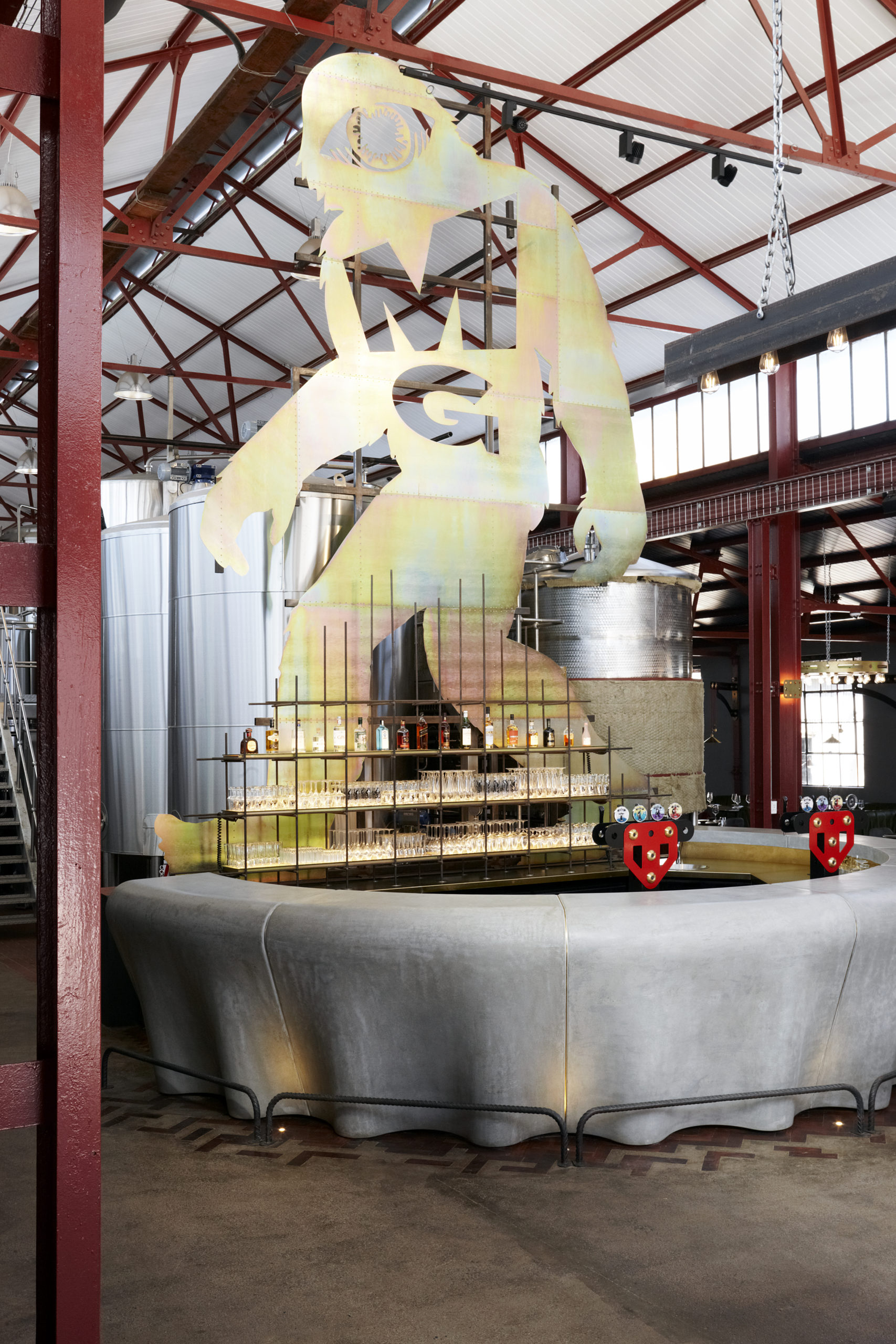 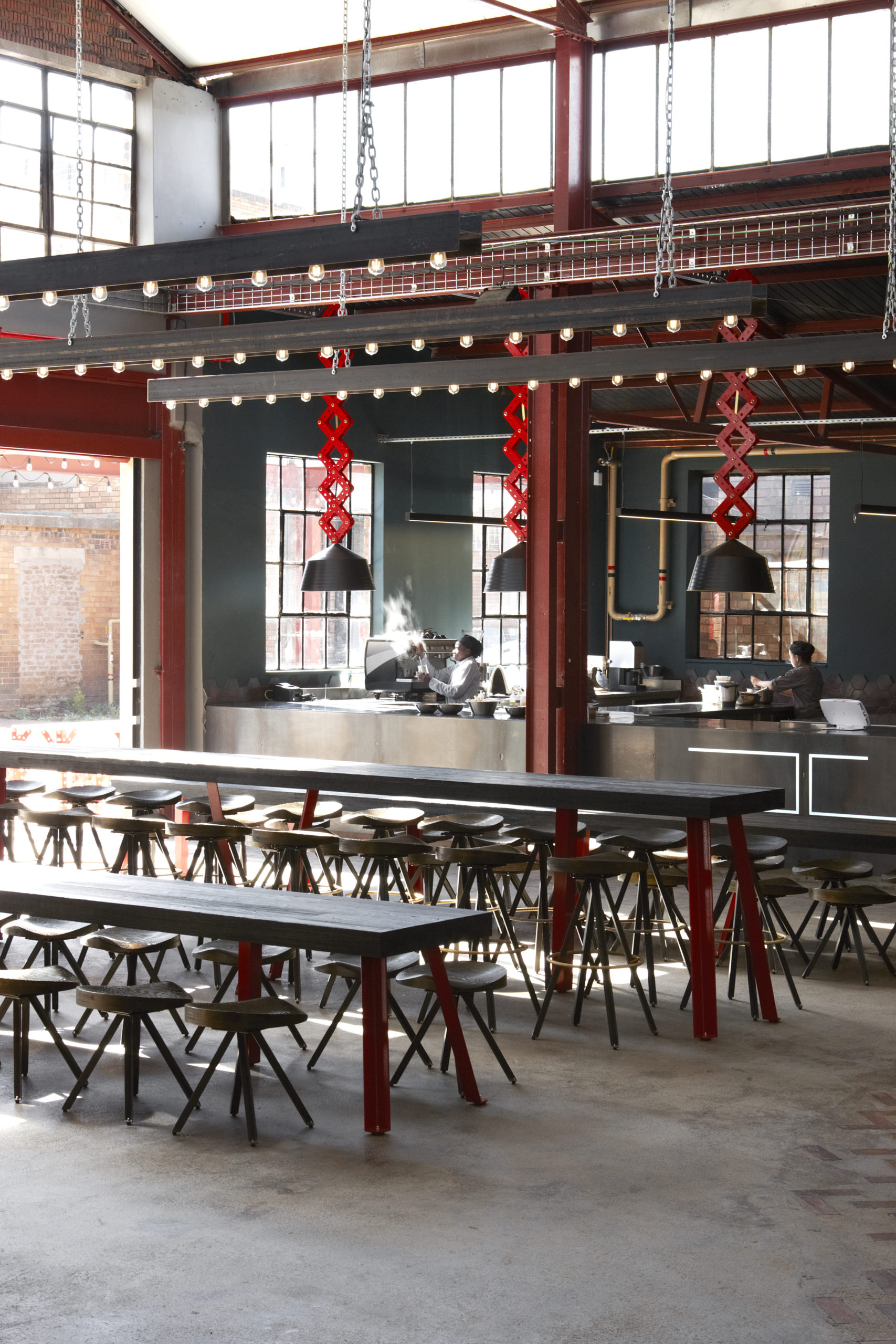 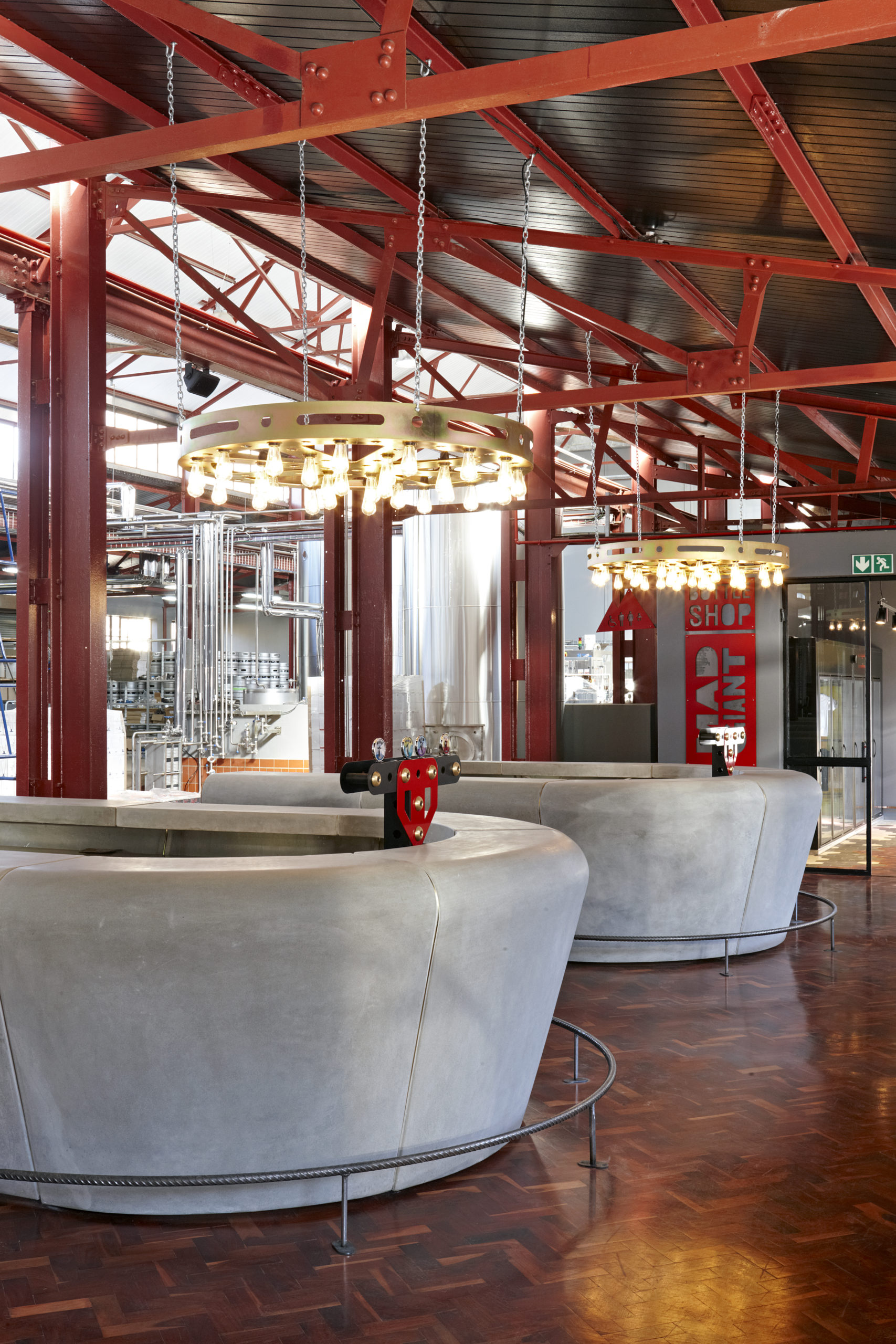 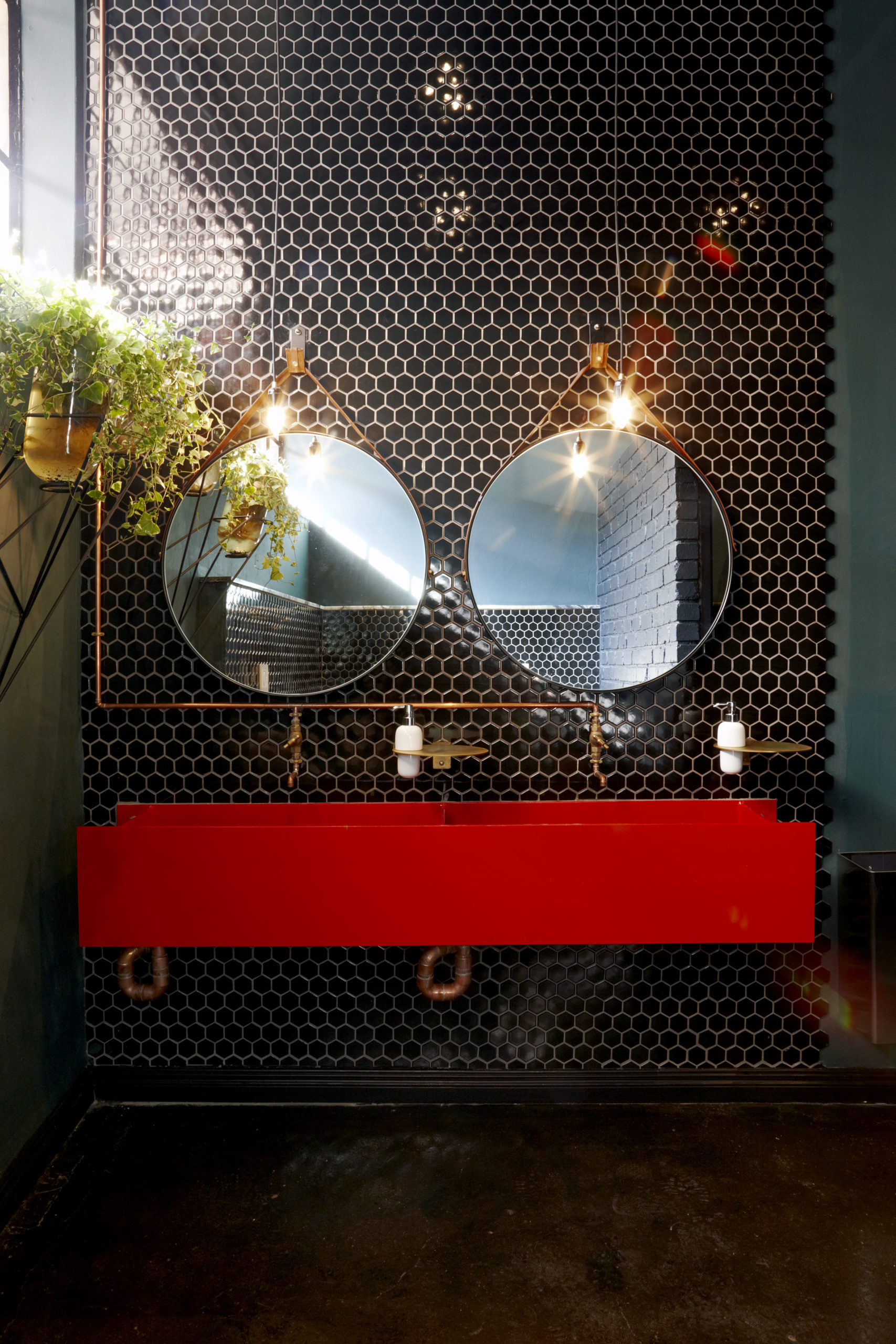 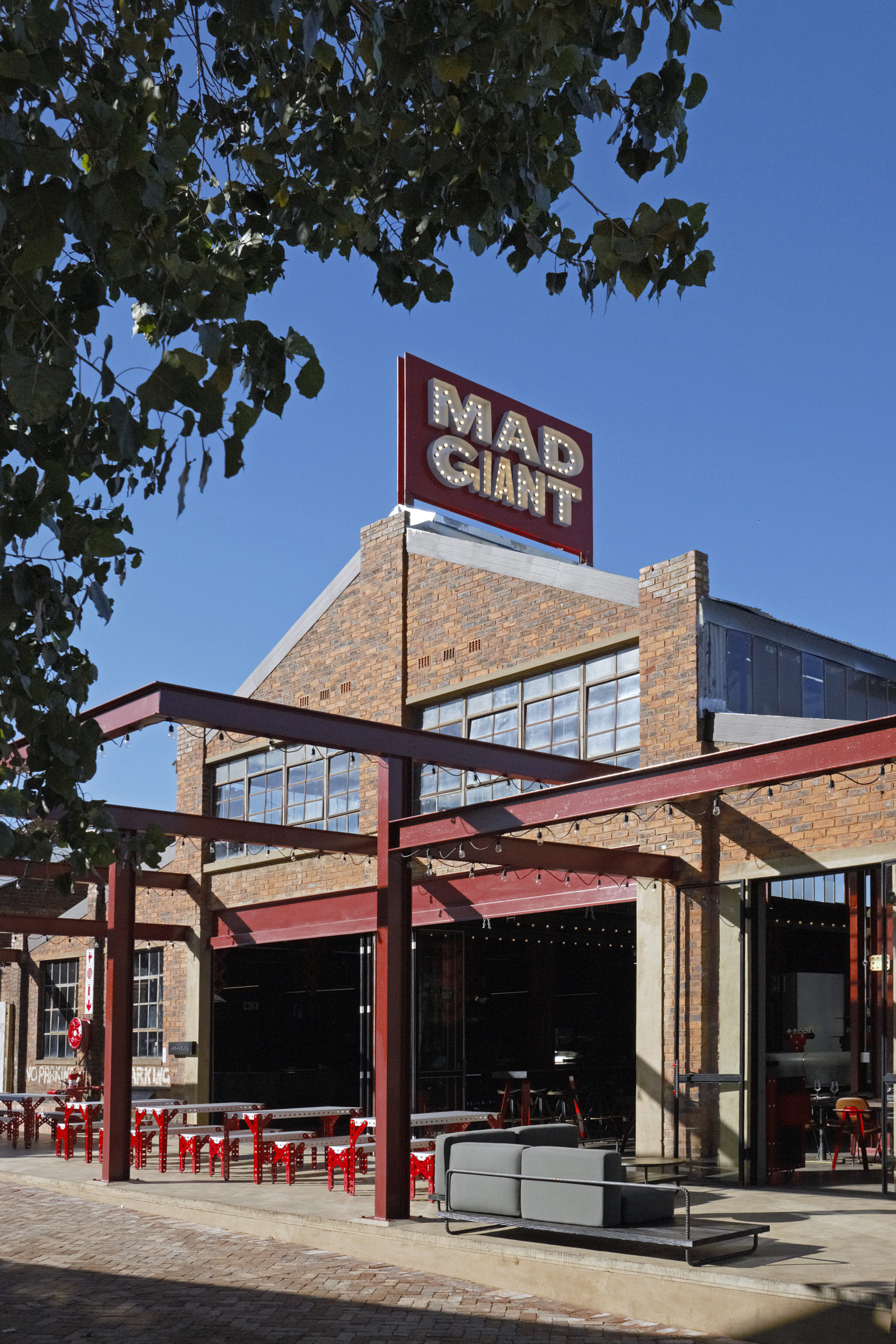 South African design icon Haldane Martin has designed a brewery and restaurant interior for Mad Giant beer that plays with scale referencing oversized metal toy construction kits. The result is a creative and welcoming industrial space that brings to life the DIY ethos of the renegade South African craft beer, while contributing to the urban regeneration of inner-city Johannesburg.

Mad Giant craft beer is a South African beer made by chemical engineer Eben Uys, still in his early thirties, a man with a passion for experimenting with science and flavour who is not afraid of big ideas. Mad Giant represents “the small guy brave enough to dream big and do something crazy,” in the words of its founder. Its mindset is renegade, propellerhead and somewhat madcap.

The brewery and restaurant in downtown Johannesburg was designed to embody the Mad Giant ideology and to create a space where beer drinkers can experience the free-spirited, adventurous philosophy of the brand, while experiencing a celebration of flavour and uninhibited creativity in a vibrant environment.

The interior concept draws on the mad, DIY mindset of Mad Giant and plays with scale to emphasise the giant behind the brand. Emerging as the perfect  brand mascot, a giant yeti forms a centrepiece installation. This also translates onto the new brand identity of the beer bottle labels and other graphic design elements.

Standing from floor to ceiling behind the front bar facing the entrance of the brewery, the 7-metre-tall icon is made from laser-cut yellow zinc-passivated steel, riveted to a mild steel framework. It is spot lit from the ceiling, making it radiate from every angle of the space. At its base is the bar display with a large circular bar counter and branded Mad Giant beer taps in front of it.

The 6-metre-diameter cast concrete bar counters take the form of a giant bottle cap beneath the giant yeti. There are another three simpler concrete bars at the back of the brewery in the tasting pods.

All the furniture in the brewery is bespoke and includes a range of original pieces by Haldane Martin made from custom-made scaled up Meccano, like giant toys turned into furnishings, to bring the brand vision to life. Giant murals with a playful, childlike aesthetic adorn the walls, enhancing the effect of a child’s big dreams brought to life.

The restaurant and brewery’s seating formations are diverse and varied, allowing for versatile social engagement. Outdoor tables and benches in the sun are suited for casual groups of friends or families sitting together. Inside, long beer-hall tables with sandblasted, black-stained table tops and swivel bar stools facilitate social interaction among large groups and strangers, encouraging flexible and spontaneous movement and conversation. Beyond that, four-seater tables are perfect for couples or small groups coming for a meal. At the back of the restaurant banquet seating areas and two-seater tables alongside beer tasting pods look onto the beer tanks for a more intimate seating formation and personalised beer-tasting experience.

The floors are spectacular, combining different materials in ways that reiterate the trope of blown-up toy building blocks. The dining area floor is made from recycled Rhodesian teak parquet, laid in a herringbone formation. At the front of the brewery the herringbone fragments into pixelated pieces, merging into stained concrete with floating pieces of wood creating playful patterns. In the bottle store the wooden flooring pixelates into honeycomb-shaped black and white tiles.

The walls along the length of the brewery feature grey-scale murals by graffiti artist Nomad. There are four portraits, one of a hooded woman, another a child in a bear onesie (his ‘mad giant’ suit) and the third of two children’s faces wearing goggles. Hexagon tiles feature on the walls of the bathrooms and kitchen.

An 80-year-old shed that has been refurbished, the building’s roof was replaced in renovations and left with exposed steel trusses painted with burnt red undercoat. The building itself used to be an old elevator factory in Johannesburg’s industrial hey-day and stood empty for years before the Mad Giant renovation. The transformation speaks to the upsurgence in movement back into South Africa’s financial capital’s inner city, with a revival of interest in the downtown area’s creative regeneration.

Bespoke lighting was designed for the space by Haldane Martin including large black feature pendant lights with gold interiors hanging from upscale red Meccano above the kitchen pass, and beer hall chandeliers with a contemporary twist in the dining area, made from circular wheel-shaped Meccano with LED Edison lightbulbs.

The outdoor tables and benches are created using custom-made scaled up Meccano pieces, inspired by the modular designs from the famous construction toy company. This construction technique also appears in the feature pendant lights that light up the kitchen pass, the LED Edison beer hall chandeliers in the dining area and in the table bases.

The banquet seating made from distressed leather is completely unique to Mad Giant. The formation is inspired by traditional diner seats, with a ribbed back that references the iconic Haldane Martin Songololo Sofa. The standout feature of the seats are their draped unfinished back and sides, creating a beautiful effect of hanging leather.

The dining chairs have rebar arms and legs, metal back and legs sprayed bright red with a Mad Giant emblem laser-cut into the back, with seats and seatbacks upholstered in distressed leather with red stitching.

The bathroom has massive I-beams painted bright red converted into basins. The hexagonal pattern of the bottle store floor tiles is continued in the bathroom’s scaled-down honeycomb wall tiles, as well as in the kitchen where larger black hexagonal tiles are emphasised with bright red tile grout. These elements continue the theme of building blocks while also alluding to the periodic table, to reinforce the mad scientist character behind the brand.

The interior was worked on from concept to installation between the Johannesburg venue and Cape Town, where the Haldane Martin design team is based. The process went smoothly and the client and designer are both incredibly happy with the final product. As the doors open to the public so interest is piquing in this completely unique, innovative space that caters to a wide audience of beer, food and design lovers alike.

Pioneering new flavours and iconic design, Mad Giant celebrates a brave creative spirit that speaks to the urban regeneration burgeoning in Johannesburg’s inner-city. It is a space that highlights the transformation of an area once lost to detriment, which is once again being revived to its former glory.